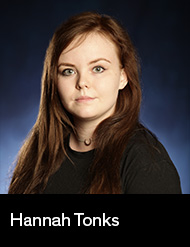 Born in New Zealand and raised in Canberra, Hannah departed the Nationʼs Capital in 2015 to pursue an education in the arts. She graduated from the Australian Institute of Music (Dramatic Arts) with a Bachelor of Performing Arts degree in 2016.

Hannah is a versatile theatre practitioner with experience as a performer, assistant director, dramaturg, designer, stage manager and lyricist. She is devoted to the arts and aspires to create new Australian productions.

Hannah enjoys collaborating with others as much as she enjoys locking herself away at her writerʼs desk. Though she loves performing, crewing and being involved with productions in general, somehow Hannah always manages to find her way back to the page.

Her writing credits include the stage productions of Cluedo The Musical (2008), The Bestiary (2016), At Odds (2016) as well as the collaborative production Delirious Confetti with Rachel Kerry (director), Brianna Russell (designer) and Aboriginal Centre for the Performing Artsʼ students. Her writing credits for short film include Pig Heart (2017) and Unsex Me (2017).

She also worked as a Dramaturg for Twelfth Night and as a Stage Manager/Assistant Director for Anna Karenina (AIM– Dramatic Arts).