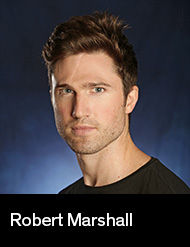 Rob is a Tasmanian actor, educator and adventurer. He holds a Bachelor of Arts degree from the University of Melbourne and is a graduate of the Atlantic Acting Schoolʼs Professional Conservatory in New York City.

Prior to commencing his studies at NIDA, Rob was working as an actor and acting teacher in New York, Melbourne and Hobart.

As a voice practitioner, Rob is passionate about guiding actors towards individual expression through the development of a ʻpsycho-visceralʼ connection to text. His teaching practice is currently steeped in the array of philosophies offered at NIDA, including those of Cicely Berry, Arthur Lessac, Catherine Fitzmaurice and F.M. Alexander.

Rob was recently awarded the Tasmanian Arts Advisory Board Chairmanʼs Scholarship for 2017, giving him the opportunity to travel to the U.S.A. to intern with world-renowned voice and speech coach Beth McGuire, at the Yale School of Drama.