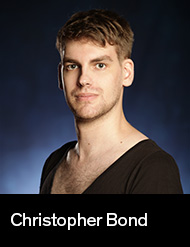 Christopher is an emerging theatre maker with a focus on socio-political content.

Christopherʼs major focus is the audience, and as a result will use any technique or process available to ensure the audience experience the production as intended.

In 2017, he was Director of 27 Wagons Full of Cotton by Tennessee Williams (NIDA and Actors Centre Australia collaboration); Trump! by Stephen Sewell (University of Wollongong, currently unpublished); and Untitled, devised by Georgie Adamson, Ang Collins, Camille Ostrowsky and the performers of Aboriginal Centre for the Performing Arts.

In 2018, he will be directing Samantha Donvito in her new work Aphrodite and the Invisible Consumer Gods, at the Adelaide Fringe.