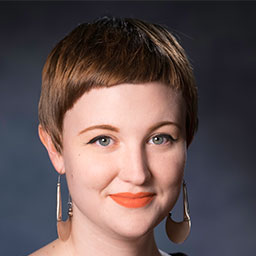 Prior to studying at NIDA, Sabina completed a Bachelor of Arts (Art History) at the University of Queensland. During this time she also practised as a painter and costumier, going on to work with Opera Queensland’s costume department first as a volunteer and later professionally. This experience led her to pursuing a career in production design.

During her time at NIDA as an undergraduate student, Sabina designed the music video for WILSN’s Walking for Days for triple J Unearthed, and collaborated on the design of an exhibition and performance at the 2015 Prague Quadrennial of Performance Design and Space.

Earlier this year Sabina designed set and costumes for A Midsummer Night’s Dream, also developing textiles, effects, and projection material for the show. She is currently designing a production of a new adaptation of Woyzeck which will tour to Theatre Works in 2017. Sabina is a recipient of a 2016 William Fletcher Foundation Tertiary Grant for emerging artists.