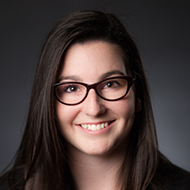 It took Katelyn a few years out of school to finally accept that a career other than theatre wasn’t going to work for her. After running away to London for a year, she returned determined to study at NIDA and become a musical theatre stage manager. However, at the end of first year, she was thrown into a sound design role and there began a new love affair.

Terrified of the idea of relying on her creative ability, Katelyn vacillated between stage management and sound design for another six months before she could no longer deny that her heart belonged to sound. Since that exhilarating moment of accepting her future, she has committed as much time as she can to learning about sound design, including sound systems and technology, and securing some exceptional secondments with two of the leading sound designers in Sydney and Melbourne.

Katelyn is excited to begin a career as a sound designer for independent and main stage theatre. She is committed to fostering the professional relationships she has been fortunate enough to develop during her time at NIDA. She would like to thank her NIDA tutors and mentors for their constant support and inspiration.