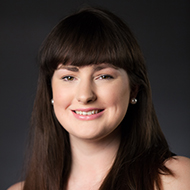 Cat, originally from the small town of Burnie on the north-west coast of Tasmania, has been involved in theatre since age 10, when she played Jack in Jack and the Beanstalk in the Grade 4 pantomime. Since then she has completed a Bachelor of Contemporary Arts (in Theatre) at the University of Tasmania. At the end of her graduating year she was awarded the Country Club of Tasmania Theatrical Development Award, enabling her to work for UTAS as an associate lecturer, in conjunction with working for CentrStage Theatre Company as their publicity officer.

During her time at NIDA, Cat has had the opportunity to push herself like never before, redefining her concepts of stress, hard work and exhaustion in the process. The past three years have also transformed her perceptions of friendship, respect, achievement and success, working with passionate tutors, highly sought after industry professionals and the tenacious young artists she calls her classmates. She is in awe of the talent NIDA brings together under one roof. Cat would finally like to emphasise her love of dogs and gainful employment; she is looking forward to seeing what the future holds for her.