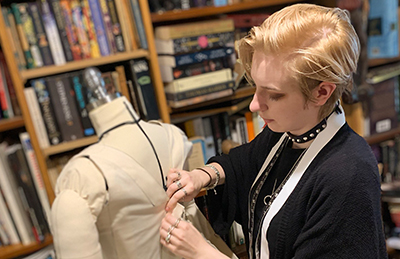 The recent COVID-19 restrictions have meant that all of NIDA’s Bachelor and Master of Fine Arts courses have been delivered online, including the famous Costume course.

NIDA’s Bachelor of Fine Arts (Costume) course transitioned to a new platform to continue the development of emerging costume makers, learning how to create beautiful costume works that appear in major films, TV and theatre.

Two first year costume students, Lily Mateljan and Esther Zong, shared the experience of home learning, getting to grips with the basics of Tudor bodices from their home studios. 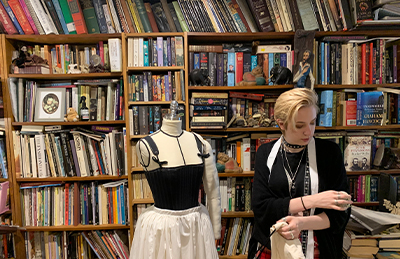 NIDA’s Head of Costume Annette Ribbons said the transition online did present challenges, as NIDA had to close the campus to the students and ensure that they would be able to work from home. However, the dedication of both students and staff meant that the classes commenced after only a two-week break.

‘We ensured that all the students had working laptops or computers to be able to access the online course,’ said Annette. ‘We also had to check that they had working sewing machines. Just one student living away from home invested in a new machine but all other students had access to one already.’

As NIDA is a national education institution, many of the students moved back home across the country. ‘In a way though having them scattered doesn’t make a difference as everyone is online anyway,’ said Annette.

‘The students took their allocated NIDA mannequins from the Kensington campus and we also sent them packs of materials (drafting paper, calico and other fabrics, thread etc.) for the upcoming classes. Having had seven weeks of face-to-face classes and demonstrations before the shutdown, once we moved online, the students were quite familiar with the processes already and seem to have adapted well. 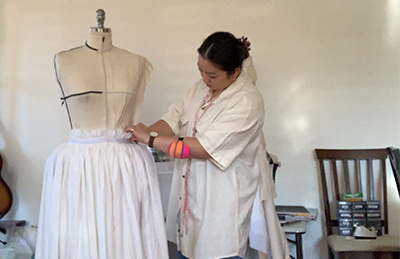 First year student Esther Zong said she took over the family dining table. ‘My mum helped me set up a smaller collapsible table in the corner of our living room to help organise the rest of my materials,’ said Esther. ‘We’ve also got a small walk-in pantry that had been converted to a sewing room when we first moved in for my mum’s old machines, which are miraculously still working well enough for me to use. So I’ve been pretty lucky with managing the transition, as long as I get the table cleared for dinner every night!’

Two of the core skills that the first year students are learning – Draping and Flat Patternmaking – are both methods of creating toiles, and ultimately costumes.

The meticulous art of toile making derives from the French word for linen cloth. Toiles are often used only to describe a garment and made to test a pattern before it is made into a costume.

Annette described how NIDA is embracing technology to communicate with students. ‘We have a live Zoom session which includes a demonstration, then they are given time to undertake the task followed by a catch-up later.’ She said these sessions are also recorded in case students need to review or refer back to the session.

‘Definitely the most challenging thing about this process has also the most valuable learning experience,’ said Lily Mateljan. ‘It’s learning to trust yourself and what the teachers have taught you.’

In 2020, our Open Day(s) will take place online, with activities spreading across four days from Wednesday 17–Saturday 20 June. Register here. 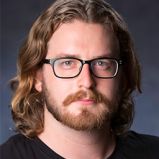 Alexander began playing the violin at the age of four, encouraged by a family who wished him to explore his artistic pursuits.