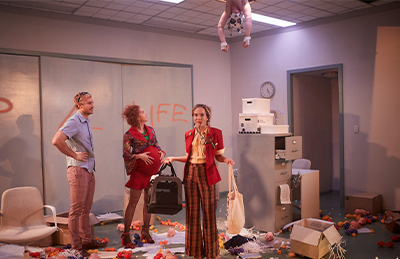 The National Institute of Dramatic Art (NIDA) and Sydney Theatre Company (STC) are proud to announce a new pathway for NIDA writing graduates, supported by the Longes Family. The STC and NIDA Pathways Commission will enable a theatrical work to be developed and considered for performance by one of Australia’s premiere theatre companies.

The initiative brings together the combined resources of both organisations to be utilised to create new Australian work. NIDA’s emerging actors and Sydney Theatre Company’s directors will be involved in the process.

Throughout, the selected writer will have the unique opportunity of working with the combined artistic forces of the Sydney Theatre Company Literary Manager Polly Rowe and Artistic Director Kip Williams, and NIDA’s Head of Writing Dr Stephen Sewell.

'I am thrilled that we are partnering with NIDA for the STC and NIDA Pathways Commission program,' said STC Artistic Director Kip Williams. 'Sydney Theatre Company has a long history of nurturing new and exciting Australian voices and programs like this are a wonderful way to help create direct connections between us and educational institutions. There are so many talented playwrights in our community and it is vital that organisations like Sydney Theatre Company and NIDA create pathways that help their entry into the professional industry.'

NIDA CEO Liz Hughes said that,'NIDA is delighted to be collaborating with the STC to support the development of new Australian work with this Pathways Commission. NIDA deeply values strong relationships with Industry and are delighted to be working again with the STC, a pivotal performing arts company with a strong commitment to fostering Australian writing. NIDA appreciates the generous support of the Longes Family towards the STC and NIDA Pathways Commission.’

The deadline for submissions is 8 June. To make a submission go here or email alumni@nida.edu.au for more information.

NIDA's 2020 alumni from the Master of Fine Arts (Design for Performance) course.