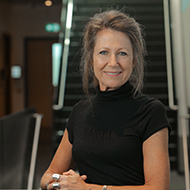 Marcia has worked in the costume industry for over 30 years, having started her career as a cutter at the Sydney Theatre Company. A formational experience, Marcia has since worked continuously in film and theatre on a freelance basis in the costume department.

At NIDA Marcia teaches orientation across the Bachelor of Fine Arts courses in Design for Performance, Properties and Objects, Staging and Costume. In addition, she teaches costume-making techniques as well as cutting and pattern-making for historical costume as well as working closely with the costume students during NIDA’s annual June and October play production programs.

Recent productions that Marcia has worked on include the making of principal female costumes on films such as The Daughter and The Dressmaker, and theatrical productions such as Ghost, Strictly Ballroom, My Fair Lady and Fawlty Towers.

Alex was inspired to learn about theatre when she saw Robert Wilson’s The Old Woman, which felt somehow more human than anything she’d seen before.